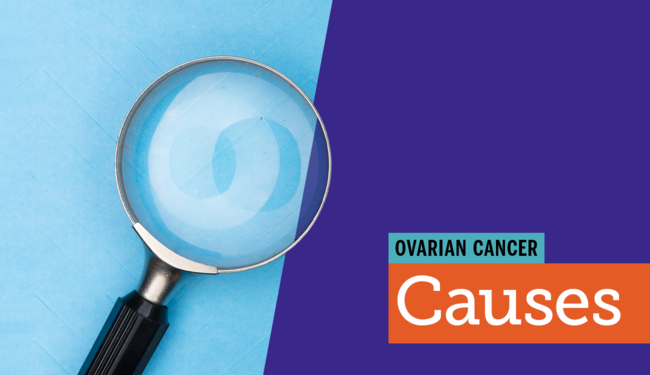 Ovarian cancer occurs when genetic mutations in cells cause tumors to form on or in the ovaries. Tumors of the fallopian tubes and the peritoneum (the lining of the inside of the abdomen) are often grouped together with ovarian cancer because they have similar causes, symptoms, and treatment plans.

Ovarian cancer is caused by genetic mutations that allow cells to divide and grow in a disorganized way. There are two main types of mutations, inherited and acquired.

How Cells Transform Into Cancer

Normal cells divide in a regular, ordered fashion, forming new cells that are exact copies to replace old ones. Certain genes in each cell are responsible for telling cells when to divide and when to stop dividing. Other genes identify and fix problems in DNA that are copied incorrectly, or cause cells with bad DNA to self-destruct rather than keep multiplying. If a genetic mutation causes one or more of these genes to turn off in some cells, the cells can divide at a faster rate without regulation or order, becoming more and more mutated. Mutations may accumulate, further speeding the unchecked growth of abnormal cells. When these disordered cells begin to invade nearby tissues or break off and migrate to other locations, they have become cancerous.

It is important to note that while science is good at finding correlations — or apparent relationships — between factors and disease, correlation does not prove the factor causes the disease. Many risk factors for ovarian cancer have been identified and are being studied for their role in the development of the disease.

Between 20 percent and 25 percent of ovarian cancers are thought to be influenced by genes inherited from parents. If you have a family history of ovarian cancer, your own risk is increased. When a particular gene mutation that is strongly linked to cancer is passed down within a family, it is called a family cancer syndrome.

Hereditary breast and ovarian cancer (HBOC) is a family cancer syndrome that can lead to ovarian or breast cancer, as well as other cancers such as pancreatic cancer. Women with HBOC tend to develop cancer at a younger age or get cancer multiple times. When ovarian cancer runs in families, 65 percent to 85 percent of the time it is caused by mutations in the BRCA1 and BRCA2 genes.

Other family cancer syndromes associated with ovarian cancer are caused by different gene mutations. For example, Lynch syndrome is caused by mutations in the repair genes MLH1, MSH2, and MSH6. Lynch syndrome increases a person’s chance of colon, ovarian, stomach, pancreas, kidney, and brain cancers. Cancer may also run in a family, but no known gene mutation can be found. If ovarian cancer runs in your family, genetic testing may help you learn whether you are at increased risk.

Mutations in DNA are inevitable. The older you get, the more acquired mutations you will accumulate. However, cancer only develops in a small percentage of people.

There is a link between ovulation, or the release of an egg from an ovary, and ovarian cancer risk. Experts think this may be because the more a woman is exposed to estrogen, a reproductive hormone that predominates in women, the more likely she is to get cancer. Going through more cycles of ovulation raises risk, and things that block ovulation cause risk to decrease.

Factors that increase a woman’s number of ovulations or estrogen levels, and increase ovarian cancer risk, include:

On the other hand, if a woman has had fewer ovulations, her chance of developing ovarian cancer goes down. Hormone-related factors that decrease a person’s risk of ovarian cancer are:

Some surgeries can also have an effect. Getting tubal ligation, or having the “tubes tied,” can lower a person’s risk for ovarian cancer by 67 percent. Having a hysterectomy can lower risk by 33 percent.

Some types of chemicals can increase the risk of various cancers. This hasn’t been well studied in ovarian cancer, but some data shows that chemicals such as pesticides, herbicides, or talcum powder may lead to higher risk. However, other studies have not shown a strong link between talcum powder and ovarian cancer risk. More research is needed to fully understand whether an association exists and to what degree.

Some research has shown that eating high amounts of animal fats increases a person’s risk of ovarian cancer. Animal fats are found in red meat and dairy products, such as milk, butter, and cheese.

Being overweight is linked to several types of cancer. Experts don’t yet know for sure how ovarian cancer risk is affected, but some data shows that women who are obese may be more likely to develop some types of lower-grade ovarian tumors — tumors in which cancer cells appear more like normal cells under a microscope.

Some women use in vitro fertilization (IVF) to help them get pregnant. While some research has found that IVF increases the risk of lower-grade ovarian tumors, other studies have not found a strong link. If you are considering going through IVF or have used it in the past, your doctor can help you understand whether fertility drugs could increase your risk of ovarian cancer.

History of Cancer or Endometriosis

Ethnicity can influence ovarian cancer predisposition. White women in North America and Europe are most likely to get ovarian cancer. Women of other races have a lower chance of getting ovarian cancer, probably due to a mixture of inherited and environmental factors.

Ashkenazi Jews of Eastern or Central European descent are more likely to have BRCA mutations. Their increased ovarian cancer risk is probably mostly due to inherited mutations.

Women who live in Asian countries are thought to be less likely to get ovarian cancer because of environmental factors, such as diet and lifestyle. When Asian women move to Western countries, their rates of ovarian cancer increase.

Can Ovarian Cancer Be Prevented?

Unfortunately, there is no guaranteed way to make sure you don’t get cancer. Some women have a lot of risk factors and don’t get the disease, while the majority of women who are diagnosed don’t have any risk factors. Additionally, most risk factors like age and genetic predisposition are beyond anyone’s control. If you are concerned that you may have a higher risk for developing ovarian cancer, focus on lowering your risk by changing the environmental factors within your control.

If you think you may be at an increased risk, keep an eye out for some of the symptoms of ovarian cancer, such as bloating, abdominal pain, or frequent urination. Talk to your doctor to learn more about how your own individual characteristics may affect your chance of developing cancer. BRCA gene mutations are a possible cause of ovarian cancer. Ovarian cancer develops when genetic ... According to the American Cancer Society, a woman who lives in the United States has about a 1 in...

According to the American Cancer Society, a woman who lives in the United States has about a 1 in...
read article >