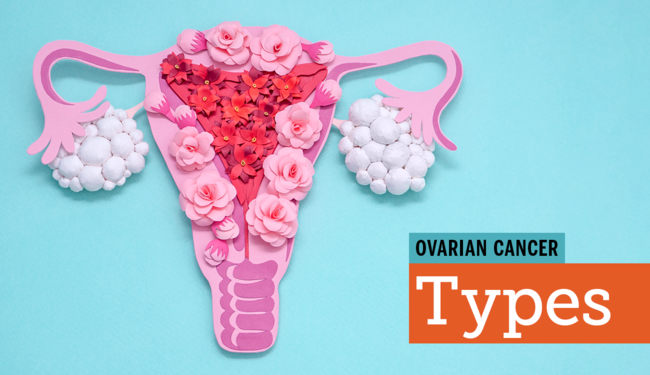 Epithelial vs. Germ vs. Stromal

Ovarian cancers are divided into groups based on which cell type a tumor came from. The three main cell types in the ovary are:

Between 85 percent and 90 percent of ovarian cancers are classified as epithelial, making this the most common type. Cancers that form in the fallopian tube (tubes that carry eggs from the ovary to the uterus) and in the peritoneum (the tissue that lines the inside of the abdomen) also fall under this category. They often act similarly to epithelial ovarian cancer and may be treated the same way.

A woman’s risk of these types of cancer becomes higher as she gets older. Half of all cases of ovarian cancer are in women over 63 years old.

There are four main categories of epithelial ovarian cancer based on what the cells look like under a microscope: serous, mucinous, clear cell, and endometrioid.

High-grade serous carcinoma (HGSC) is the most common subtype of epithelial ovarian cancer, making up about 70 percent of all ovarian cancer diagnoses. The higher a woman’s number of ovulations (when an ovary releases an egg), the higher her chances of developing HGSC. Having a first period at a younger age or starting menopause later are both considered risk factors for this disease. On the other hand, pregnancy, breastfeeding, and hormonal birth control all stop ovulation and therefore lower a woman’s chances of developing HGSC.

HGSC is often not detected until the tumors have grown to more advanced stages and have spread to other locations in the body, causing symptoms like bloating, nausea, and breathing problems. People with HGSC usually need to have surgery and undergo chemotherapy.

Peritoneal cancer comes from the cells that form the lining in the abdomen and pelvis. It is also a very rare type of cancer. Anyone can get primary peritoneal cancer, but it is more common in women. People who have had their ovaries removed can’t develop other types of ovarian cancer, but they can still have peritoneal cancer. This form of cancer is usually treated the same as HGSC, and people tend to experience the same symptoms.

Low-grade serous carcinoma (LGSC) tumors are rare, making up 6 percent to 8 percent of ovarian cancers. They are most often seen in young adults and middle-aged women. LGSCs are very resistant to chemotherapy and will often come back after treatment.

Endometrioid cancer is the second most common type of epithelial ovarian cancer, making up about 20 percent of cases. In one study of 533 women, the median age at diagnosis for women with endometrioid cancer was 50 years old. Women tend to be diagnosed when their endometrioid tumors are at an earlier stage, and as a result have a better prognosis than women with high- or low-grade serous carcinoma.

Mucinous ovarian cancer is the most common type of ovarian cancer in women under 40. It is often diagnosed when tumors are still at an early stage, in which case it has a good prognosis. It is also often resistant to chemotherapy. Mucinous tumors may be hard to tell apart from tumors that have spread to the ovary from other locations in the body.

Cancer experts usually classify tumors in two ways. Benign tumors are noncancerous, often harmless, and won’t spread to other tissues. Malignant tumors grow quickly and may spread throughout the body, making a person very sick. Some types of tumors appear to be in the middle of these two categories. Doctors refer to these tumors as borderline.

Borderline epithelial tumors, also called low malignant potential tumors, make up about 15 percent of ovarian cancers. These are most often seen in women between the ages of 20 and 40. Borderline tumors are treated with surgery, but not usually with chemotherapy.

Germ cell tumors arise from the cells in the ovary that make eggs. This is a more rare cancer type, and only makes up about 5 percent of ovarian cancer cases. Unlike epithelial ovarian cancer, germ cell cancer tends to affect younger women, with 80 percent of cases found in women less than 30 years old. This type of cancer usually comes with a good prognosis. Treatment is successful in 90 percent of people with germ cell cancers, and a woman’s fertility can usually be preserved.

The majority of ovarian germ cell tumors are benign, which means they are not cancerous and are not usually life-threatening. There are a few kinds of benign germ cell tumors, but the most common is a mature teratoma, which occurs most often in teens and young women. These are treated by surgically removing some or all of the ovary.

This type of tumor is cancerous and is not very common. They often come with a good prognosis. Malignant germ cell tumors are often found in teens or younger women. There are several types of malignant germ cell ovarian tumors, including dysgerminomas, immature teratomas, and endodermal sinus tumors.

Dysgerminomas are the most common type of cancerous germ cell tumor. They most often appear in teens and young women. Treatment involves removal of the affected ovary, which usually cures the disease. Even if a dysgerminoma has spread outside the ovary, surgery plus radiation or chemo can be effective in 90 percent of cases.

This type of tumor most often forms in children. Endodermal sinus tumors are rare, making up about 25 percent of germ cell tumors. Surgery and chemotherapy can effectively treat this tumor more than 90 percent of the time.

There are several types of stromal ovarian tumors. Fibromas and thecomas are usually benign tumors, whereas granulosa cell and Sertoli-Leydig cell tumors tend to be malignant.

Ovarian fibromas are most often diagnosed during or after menopause. They often grow slowly and don’t cause symptoms. Fibromas often don’t need treatment, although larger ones may be surgically removed.

Thecomas are usually benign and make up about 0.5 percent to 1 percent of ovarian tumors. They usually produce estrogen and may lead to symptoms such as abnormal vaginal bleeding.

This type of tumor is rare, making up less than 0.5 percent of ovarian cancers. Sertoli-Leydig cell tumors are most commonly found in young women. Like granulosa cell tumors, they produce hormones, but rather than making the female hormone estrogen, they make the male hormone testosterone. This can lead to symptoms such as facial hair and a deeper voice.

Surgery, chemotherapy, and radiation may be used to treat Sertoli-Leydig cell tumors, especially if they’ve spread to other parts of the body. This type of tumor often has a good prognosis.

Other Types of Ovarian Cancer

There are other types of ovarian cancer, some of which are inherited and some of which have causes that haven’t yet been identified.

Small Cell Carcinoma of the Ovary

Small cell carcinoma of the ovary (SCCO) is an extremely rare form of cancer that affects young women. It is not clear what type of cell this cancer comes from. Around two-thirds of women with this cancer also have hypercalcemia, or high levels of calcium in the blood. This cancer is often aggressive and grows quickly. Not much is known about how to treat SCCO because it is so rare, but women with this cancer may receive surgery and chemotherapy.

People with this syndrome usually have changes in the BRCA1 or BRCA2 genes. These genes help fix damage within the cell. When the genes don’t work properly, cells are more likely to become cancerous. People with HBOC often have a family history of cancer and are more likely to get cancer before the age of 50.

In addition to being grouped based on cell type, ovarian cancers are also usually classified by stage. For example, stage 1 tumors are less advanced and easier to treat. Stage 4 tumors are more serious, have spread to other places in the body, and come with a worse prognosis. Doctors will consider both the type of cancer as well as its stage when coming up with a treatment plan. Read more about stages of ovarian cancer.