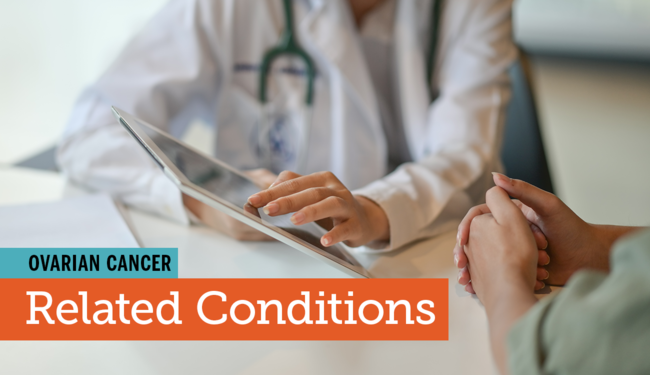 Many people with ovarian cancer also have other health conditions. Some of these may have existed before the cancer diagnosis, but others may develop later as a result of the cancer or the treatment. The type of treatment you receive for ovarian cancer may depend on these other conditions.

When someone has more than one health condition at the same time, the conditions are known as comorbidities. When someone has a medical problem resulting from a disease that makes treatment more difficult, it is known as a complication. In people with ovarian cancer, having a comorbidity can complicate cancer treatment and make a person more sick.

Age can play a role in whether a person has comorbid conditions. The longer someone lives, the more likely they are to have a chronic illness. An older person who receives a diagnosis of ovarian cancer is more likely to already have other health conditions, compared with someone who is younger. Among people with epithelial ovarian cancer, the most common type of ovarian cancer, one study found that 34 percent of participants under the age of 70 had comorbidities, while 63 percent over the age of 70 had them.

People who have a higher stage of ovarian cancer are also more likely to have comorbidities. These comorbidities also tend to be more severe.

Endometriosis is usually linked to two specific types of ovarian cancer, endometrioid and clear cell. These cancer types are usually found at an early stage. Endometriosis doesn’t seem to lead to worse outcomes or a higher chance of death for people with ovarian cancer.

Hypertension, or high blood pressure, is a condition where blood pushes against the walls of the blood vessels with high force. Hypertension is very common, but it can be serious if untreated. It increases a person’s chance of other health conditions, such as heart attack, heart disease, and stroke. High blood pressure doesn’t usually cause any symptoms, so the only way to know for sure if you have it is to have your blood pressure measured by a health care professional.

The term heart disease, or cardiovascular disease, refers to several different conditions, including heart defects, blood vessel diseases, and problems with heart rhythms. Heart disease can lead to a heart attack or stroke.

Diabetes is a condition in which a person’s body can’t make or use insulin correctly. Insulin is an important hormone that helps cells use sugar as fuel. Diabetes leads to high blood sugar levels.

When it comes to ovarian cancer, women with diabetes tend to have a worse disease outlook than women without diabetes. One study of over 600 women diagnosed with ovarian cancer found that women who were also diabetic were more likely to be older, overweight, and have additional health problems. The people with diabetes also had a higher risk of dying from cancer. Researchers think this might be because high levels of sugar in the blood can feed tumor cells and make them grow more.

It is not yet clear how treatments for diabetes may impact ovarian cancer. While one study found that different types of diabetes medications led to a greater risk of death for people with ovarian cancer, another study saw that diabetics who used the drug Glucophage (Metformin) lived longer. Researchers are continuing to study this issue, but in the meantime, talk to your cancer care and diabetes team about which diabetes treatments might be the best fit for you.

Some people with ovarian cancer also have a high risk of developing breast cancer. This is because both conditions can be caused by the same genes. BRCA1 and BRCA2 are genes that help cells heal damage and block cells from turning cancerous. When these genes are mutated, they don’t work properly and can increase a person’s risk for multiple types of cancer, including both breast and ovarian cancer.

Osteoporosis, a condition that leads to weak bones, is sometimes a complication of both ovarian and breast cancer. Cancer cells may directly affect the bones, or bones may weaken as a side effect of gynecologic cancer treatments. Many cancer therapies lower the body’s levels of estrogen, and estrogen is important for keeping bones strong.

Women who are worried about developing osteoporosis may be able to get bone scans to check for bone loss, or take vitamin D or calcium supplements to keep bones strong. Make sure to always check with your doctor before taking any supplements.

People who live with cancer often experience mood disorders, like depression or anxiety. Research has found that women with ovarian cancer usually have higher levels of depression and anxiety than women without cancer. Before going through cancer treatment, about 1 out of 4 people with ovarian cancer have depression and about 1 out of 5 have anxiety. After going through treatment, levels of depression tend to go down, and levels of anxiety often go up. Women who are younger and who are single are more likely to have these mental health issues.

There are many reasons why a person may go through mental health changes after receiving a cancer diagnosis. Things like letting go of future plans, experiencing body changes, having money problems, and dealing with end-of-life planning can all contribute to depression.

Additionally, some ovarian cancer treatments — such as hysterectomy — are also linked to higher levels of depression and anxiety. This may be due to changes in hormone levels or to dealing with sudden infertility. While everyone feels sad or upset after a cancer diagnosis, depression goes beyond normal feelings of sadness. Symptoms of depression may look like:

People may have anxiety if they feel very worried or scared most of the time. For people with cancer, these feelings can be linked to fear — of pain, going to the doctor, the effect of cancer on loved ones, or dying. Symptoms linked to anxiety include worrying all the time, having difficulty concentrating, feeling tense or restless, or acting irritable or angry.

Treatment exists to help people improve their mental health while dealing with cancer. One study found that over half of women who had ovarian cancer and anxiety or depression did not seek help. Mental health treatment includes:

Research has found that having depression doesn’t lead to a higher risk of death for people with ovarian cancer. It also isn’t thought to make ovarian cancer more likely to progress to advanced stages or to come back after being treated.

The Impact of Comorbidities

Some comorbidities can lead to a worse outcome for people with ovarian cancer, but not all of them do. If you have other health conditions, it is important to work with your oncologist to make sure these other issues are also being treated. Managing comorbidities can help you have a better chance at a good outcome and may lead to a better quality of life. Ovarian cancer and cervical cancer are both gynecologic cancers — they affect organs within the f...

Ovarian cancer and cervical cancer are both gynecologic cancers — they affect organs within the f...
read article > Paraneoplastic syndromes are a group of rare diseases that can develop as a side effect of cancer...

Paraneoplastic syndromes are a group of rare diseases that can develop as a side effect of cancer...
read article > Ovarian cancer sometimes develops in addition to other health conditions. These health issues may...

Ovarian cancer sometimes develops in addition to other health conditions. These health issues may...
read article > Ovarian cancer and breast cancer share some risk factors. This means that some people have a high...

Ovarian cancer and breast cancer share some risk factors. This means that some people have a high...
read article > There are two main types of ovarian cysts — simple (functional) and complex. Each category is the...

There are two main types of ovarian cysts — simple (functional) and complex. Each category is the...
read article >