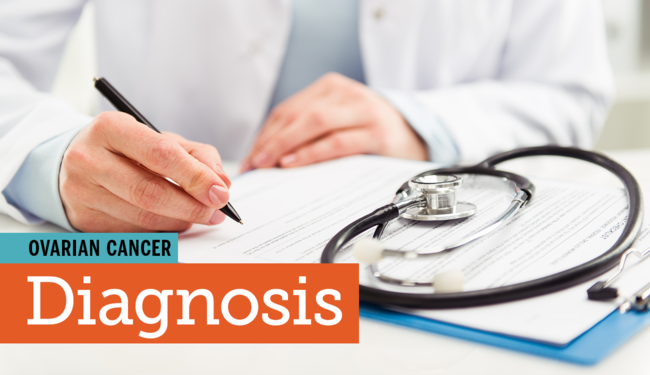 Ovarian cancer and other gynecologic cancers are usually discovered during a pelvic exam. If you have symptoms that indicate ovarian cancer, your doctor will recommend a series of imaging, blood, and genetic tests to determine the cause.

Ovarian cancer is the result of uncontrolled cell growth in the ovaries. The three main types are epithelial, germ cell, and stromal cell ovarian cancer. Overall, these fall under the umbrella of gynecologic cancers; other types include fallopian tube cancer and primary peritoneal cancer.

Currently, there are no reliable screening tests available to detect ovarian cancer. However, there are a number of tests which together can diagnose ovarian cancer. These tests are commonly available at your gynecologist’s or doctor’s office. Women who are at a high risk of developing ovarian cancer should be screened regularly.

Whether you are at a routine medical appointment or you’ve made an appointment due to concerning symptoms, your doctor will perform a routine physical exam to check your general health and to look for any signs of disease or anything unusual.

A pelvic exam is a comprehensive exam of the vagina, cervix, uterus, ovaries, fallopian tubes, and rectum. The doctor will insert a speculum into the vagina to look at the vagina and cervix. They will feel the shape, size, and position of the uterus and ovaries. They will also look for any abnormal swelling or lumps. A Pap test may be taken during this time, but it is only used to diagnose cervical cancer, not ovarian cancer.

Ultrasound imaging is the most common technique used to detect ovarian cancer. An ultrasound transducer is placed on the abdomen above the ovaries or into the vagina, and sound waves bounce off the ovaries to form a picture.

Computed tomography (CT) or positron emission tomography (PET) scans may be performed to confirm an ovarian cancer diagnosis. This type of imaging gives the doctor a detailed look inside the body from different angles. These scans can image large tumors and enlarged lymph nodes and detect signs of metastasis (spread of the cancer).

Magnetic resonance imaging (MRI) scans can also be used to create detailed images of the body. MRI scans are not used as often to find and diagnose ovarian cancer. However, they are especially helpful in examining the spinal cord and brain to detect signs of metastasis.

Laparoscopy is a technique that uses thin instruments that are inserted in the abdomen through a small incision. The instruments then send images that can be viewed on a video monitor. This allows doctors to view the ovaries and other organs to develop a surgical or treatment plan.

The only way to officially diagnose cancer is through a biopsy. This procedure removes a piece of a suspected tumor, which is sent to a pathologist who examines the cells under a microscope. Biopsies are usually done after a tumor has been removed during surgery; however, there are other methods that can be used.

In rare cases, a biopsy can be taken during a laparoscopic procedure, where doctors use small instruments attached to the laparoscope to remove potentially cancerous tissue. An ovarian needle aspiration can also be performed; this process involves placing a needle directly into the tumor through the abdomen. This method is used only in cases where the person cannot have surgical procedures, or if there is concern that a biopsy could result in the cancer spreading.

You may also need additional blood testing depending on which subtype of ovarian cancer you may have. Some types of ovarian cancer cells make specific compounds and release them into the blood. By measuring these compounds, your doctor may be able to tell which subtype you have. For example, germ cell tumors sometimes produce certain proteins, including:

If your doctor detects these proteins in your blood, it can help confirm that you have a germ cell tumor. Additionally, doctors may continue to test for these proteins over the course of your treatment to see whether a tumor is shrinking or coming back.

Stromal tumors — another subtype of ovarian cancer — produce the hormones inhibin, testosterone, and estrogen. Your doctor may test for these as well. Elevated levels of these hormones may help your doctor make a stromal tumor diagnosis.

Cancer is a genetic disease that results from gene mutations in cells. Identifying these mutations can help doctors predict the course of the disease and decide which treatments are most likely to be effective. Genetic testing is done via a blood sample or saliva sample.

Another mutation that can occur in ovarian cancer is in the NRTK gene. Fortunately, there are two targeted drug therapies available to treat cancers with NRTK mutations: Rozlytrek (Entrectinib) and Vitrakvi (Larotrectinib). These two drugs are approved by the U.S. Food and Drug Administration (FDA) and can be prescribed by a gynecologic oncologist.

Women who have been diagnosed with endometrioid, mucinous, or clear cell subtypes of ovarian cancer might have testing done to identify gene changes known as microsatellite instability. Genetic testing may also be performed to look for changes in mismatch repair genes (MLH1, MLH2, MSH6, PMS2).

Changes in microsatellite instability or mismatch repair genes can indicate a condition known as Lynch syndrome (hereditary nonpolyposis colorectal cancer). People with Lynch syndrome will probably have the same ovarian cancer outlook and treatment plans as those without these gene changes. However, they are more likely to develop other cancers, such as colorectal, uterine, stomach, and liver cancer.

Other genetic mutations found in ovarian cancer include:

Genetic testing is important for better understanding a person’s diagnosis, treatment, and outlook. However, genetic testing can also be used to predict someone’s risk of ovarian cancer before they receive a diagnosis. In particular, people with mutations in the BRCA genes are much more likely to develop ovarian cancer. If a family member has had ovarian cancer linked to one of these gene changes, or if you have other risk factors for ovarian cancer, your doctor may refer you to a genetic counselor for testing. If you discover you have a gene mutation, your doctor or a genetic counselor can help you determine proactive steps to protect your health and help you share the information with family members who may also be at risk.

Emily Wagner, M.S. holds a Master of Science in biomedical sciences with a focus in pharmacology. She is passionate about immunology, cancer biology, and molecular biology. Learn more about her here. When a doctor diagnoses a person’s cancer in its early stages, they’ll have more treatment option...

When a doctor diagnoses a person’s cancer in its early stages, they’ll have more treatment option...
read article > Doctors use several diagnostic tests, including blood tests, in order to look for signs of ovaria...

Doctors use several diagnostic tests, including blood tests, in order to look for signs of ovaria...
read article > A Pap test, or Pap smear, is a test in which a doctor or gynecologist swabs a person’s cervix (th...

A Pap test, or Pap smear, is a test in which a doctor or gynecologist swabs a person’s cervix (th...
read article > During the process of diagnosing ovarian cancer, doctors will use several tests to learn more abo...

During the process of diagnosing ovarian cancer, doctors will use several tests to learn more abo...
read article >

Does Ovarian Cancer Have a Smell? Researchers have found that ovarian cancer has a unique scent signature from other gynecological ...

Does Ovarian Cancer Have a Smell?

Researchers have found that ovarian cancer has a unique scent signature from other gynecological ...
read article > The CA-125 blood test is one of the tests that your health care provider may order if they suspec...

The CA-125 blood test is one of the tests that your health care provider may order if they suspec...
read article >