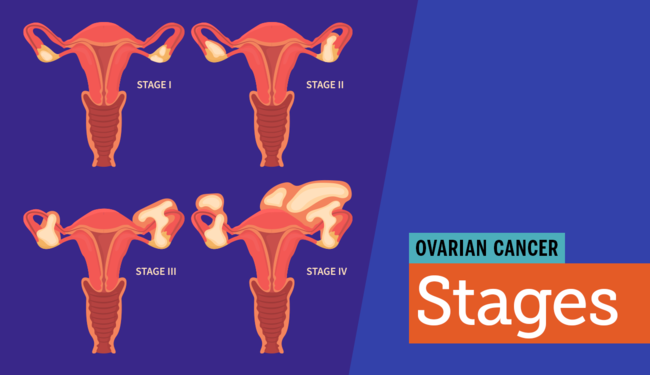 Once ovarian cancer is diagnosed, it is graded and staged. The grade describes how the cancer cells look under a microscope, and the stage describes the size of the tumor and how widely it has spread. Both grading and staging can help an oncologist predict a person’s outcome and decide which treatment options may be best.

A tumor’s grade describes whether its cells look more healthy or more abnormal. Healthy cells that are fully mature and have a specialized role in the body are described as “differentiated.” Abnormal cells that are immature, such as many cancer cells, are described as “undifferentiated.” To assess tumor grade, a doctor will take a tissue sample of the tumor and view the cells under a microscope. The doctor will then judge how differentiated the cells look and assign a grade:

Some types of ovarian cancer may not receive a grade. For example, in serous carcinoma of the ovary (a type of epithelial ovarian cancer), tumors are classified as either high-grade or low-grade rather than receiving a number. Other tumors are simply graded as borderline cancerous, which means they have low malignant potential. These tumors usually don’t spread and aren’t as harmful.

A cancer’s stage describes how much it has spread and where it is located in the body. To determine cancer stage, a doctor will generally use a process called surgical staging or pathological staging. In this case, a doctor will examine cancer tissue during and after surgery, as the tumor is removed. If someone isn’t able to have surgery, doctors may assign a stage based on a physical exam, imaging such as a CT scan, or a biopsy. This is called clinical staging.

There are a couple of ways to describe a tumor’s stage. The FIGO staging system was developed by the International Federation of Gynecology and Obstetrics. It uses a series of letters and Roman numerals, ranging from stage I (stage 1, least severe) to stage IV (stage 4, most severe).

The other staging system is called TNM staging and was created by the American Joint Committee on Cancer. It uses the letters T, N, and M to describe different characteristics of the cancer.

Doctors may describe a tumor using either or both of these systems. Both systems mean essentially the same thing. Peritoneal (the lining of the abdomen) and fallopian tube cancers are also staged using these systems, since these cancer types are similar.

In stage 2 ovarian cancer, there is a tumor in one or both ovaries or fallopian tubes. Cancer has also started spreading to nearby organs, such as the bladder or uterus. There is no spread of cancer cells to lymph nodes or to other locations in the body. This stage may also be written as T2-N0-M0. Stage 2 disease can be further divided as:

People with stage 3 ovarian cancer have tumors that have spread outside of the pelvic area. People may also be diagnosed with stage 3 cancer if cancer cells have spread to lymph nodes nearby in the abdomen or if they have a tumor that came from the peritoneum (tissue that lines the abdominal wall and covers most pelvic organs). Stage 3 ovarian cancer may be subdivided as:

How Are Grades and Stages Used?

The oncologist will use grading and staging for several purposes. This information can help a doctor estimate a person’s prognosis or estimate how the cancer will progress. It can also help the doctor know which cancer treatment plan will be most helpful. Lower-grade and lower-stage tumors are generally less severe, indicate a better disease outlook, and can be more easily treated.

Higher-grade or higher-stage tumors may be more likely to spread and need a more aggressive treatment plan. They generally have lower survival rates. However, some ovarian tumors may be treated differently even when they are at the same stage. An oncologist will also take other factors into consideration, such as the ovarian cancer type or certain characteristics of the person who has cancer. Drugs that contain the element platinum are frequently used when treating advanced ovarian...