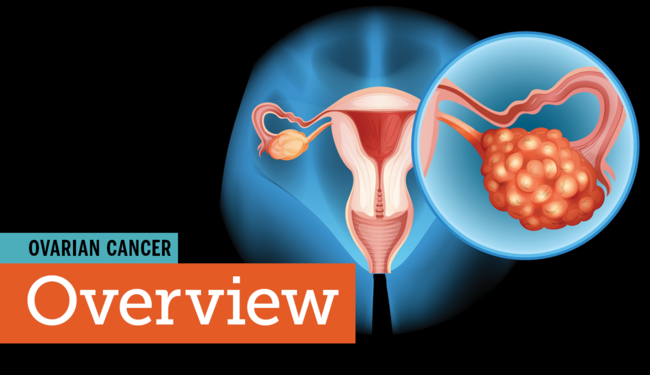 Ovarian cancer occurs when cells in the ovary begin to divide and grow in an uncontrolled way. Cancer that starts in the fallopian tubes (tubes that connect the ovaries and the uterus) and cancer of the peritoneum (the lining of the abdomen) are also usually grouped together with ovarian cancer. These cancers have similar causes, symptoms, and treatment plans.

How Common Is Ovarian Cancer?

Over 21,000 people in the United States are expected to receive an ovarian cancer diagnosis in 2021. This number has been slowly decreasing over the past couple of decades. Women have about a 1 in 78 chance of developing ovarian cancer at some point in their lives. However, certain factors may increase or decrease each person’s individual risk.

Mutations in the BRCA1 and BRCA2 genes are often the cause. People with BRCA mutations are much more likely to get ovarian tumors, as well as pancreatic or breast cancer. They also tend to get cancer at younger ages or develop cancer multiple times. Talk to your doctor about ovarian cancer screening or genetic testing if you have a family history of ovarian or breast cancer.

Other types of genetic mutations are not inherited, but acquired later in life. The older people get, the more these acquired mutations build up in cells. Therefore, ovarian cancer happens more often in older women than in younger women. Half of the women who get ovarian cancer are at least 63 years old.

Other factors can also cause acquired mutations and lead to an increased risk of ovarian cancer. These include:

Your doctor may suspect ovarian cancer during a routine pelvic exam, or you may notice symptoms that have been linked to gynecologic cancer. If there is a possibility you have ovarian cancer, your health care provider may refer you to a gynecologic oncologist, a doctor who specializes in cancers of the female reproductive system. You may get a combination of tests to form a diagnosis.

A doctor will look at overall signs of health and take a close look at the different reproductive organs. The doctor will likely ask about your personal and family health histories. Be sure to let your doctor know if you have a family history of ovarian cancer or if a first-degree relative, such as your mother or sister, has tested positive for a genetic mutation linked to ovarian cancer.

If a mass or tumor is found, imaging tests — such as an ultrasound, CT scan, or MRI — may be used to get a better look at the size and location of the tumor.

A biopsy involves removing a small piece of the tumor to get a better look at cells under a microscope. It is usually performed after a tumor has been surgically removed. Biopsies are the only way to know for sure whether a tumor is cancerous.

A health care professional may take a blood sample to look for certain biomarkers of cancer, such as cancer antigen 125 (CA-125). Having high levels of CA-125 is often linked to ovarian cancer, although it may indicate other conditions, too.

Those who have a higher risk of ovarian cancer, such as women with a family history of the disease, may need some tests even before there are any signs of cancer. For example, they may have CA-125 blood tests performed regularly or have genetic testing for gene mutations that increase their personal risk of ovarian cancer.

Read more about how ovarian cancer is diagnosed.

Stromal ovarian cancers may have slightly different symptoms, including:

Not all of these symptoms necessarily indicate ovarian cancer. However, if these signs happen often, don’t go away after you try to treat them with diet or medication, or become more severe, it is a good idea to see your doctor.

Ovarian cancer treatments may also cause side effects, such as nausea, constipation, diarrhea, fatigue, and weight loss.

Epithelial ovarian cancer is the most common type. Fallopian tube and peritoneal cancers also fall in this category. Older women are more likely to get epithelial tumors.

Germ cell tumors are more rare and are more likely to affect younger women. These cancers often have a good prognosis.

Stromal tumors, also rather rare, mostly affect older women and tend to be slow-growing. They are often caught at an early stage.

Doctors assign tumors a grade and stage in order to provide more information about the cancer. A tumor’s grade refers to how the cells look under a microscope. The stage describes the size of the tumor and how far it has spread in the body. Your tumor’s grade and stage help your oncologist know which treatments may be most effective and provide information about what your outcome may look like. For example, cancer that is found at a lower stage is often more likely to respond to treatment. Advanced stage tumors may require more aggressive therapies.

Ovarian cancer is not always treated the same way. Your cancer care team will consider many factors when coming up with a treatment plan, like your age, other medical conditions you may have, whether or not you want children, and your tumor type, grade, and stage.

Surgery is often the first step for people with ovarian cancer. Surgery allows the doctor to look inside your abdomen and see how far the cancer has spread. Your surgeon will also usually take a biopsy during this time to get a closer look at the cancer cells. Another common goal of surgery is debulking, or removing as much tumor as possible. One or both ovaries or fallopian tubes are usually removed. Other organs, such as the uterus, may also be taken out if cancer has spread there.

Many people with ovarian cancer will also get chemotherapy, which damages and kills cancer cells. Other medications, including targeted therapies and hormone therapies, may also be given depending on what type of ovarian cancer you have. In some cases, clinical trials may be appropriate. All of these treatments often come with side effects. Talk to your cancer care team to learn more about what to expect from your treatment plan.

How Do Other Health Conditions Affect Ovarian Cancer?

When someone has more than one health condition at the same time, the conditions are known as comorbidities. Conditions such as endometriosis and high blood pressure are more common in women with ovarian cancer. Additionally, people diagnosed with ovarian cancer are much more likely to develop depression and anxiety. Managing these conditions along with treating your cancer can be important.

Comorbidities and complications may affect your treatment or your outlook. Your doctor can help you better understand your individual risk factors for developing related conditions and recommend steps to lower your risk.

What Is the Prognosis for Ovarian Cancer?

These numbers are general estimates based on many different cases of early and advanced cancer. They don’t predict what will happen to each individual who is diagnosed, since many other factors affect a person’s outlook. Talk to your doctor to learn more about your own case of ovarian cancer and to get a better idea of how your risk factors and treatments may affect your prognosis.

Many cases of ovarian cancer are very treatable. Treatments have improved over the last few decades, leading to increasingly better outcomes for people with ovarian cancer. Additionally, researchers are continuing to find more effective therapies.